Even though we’d be taking the same plane and even sitting in the same seats from Seoul to Singapore, there was no way to stay on the plane during the layover. Believe me, I tried my best to convince the crew that they could just leave a bottle of Dom, and I would be more than happy to entertain myself for the next hour.

We were half-awake and somewhat delirious by the time we landed and my wife decided not to change out of her pajamas. So of course that gave me a free pass to follow her around and scream “shame, shame!”. To Singapore Airline’s credit, this was one of the most organized airport connections I’ve ever made. After de-planing, you’re basically herded through the airport like cattle, with attendants standing around every 10 feet shouting “Singapore passengers, this way!”. The process from start to finish only took about 20 minutes, and to be honest it was actually a nice opportunity to stretch our legs.

We got to the gate early and waited around another 20 minutes before it was time to board again. We started with our original seats in row 1, and with the load at just 3/8 again, we moved back to row 2 once more.

By the time it was time to eat, it had only been a couple hours since my last meal and to be honest, I was still pretty darn full. But some celebrity chef named Matt wanted me to eat more, and I wasn’t going to say no. And this wasn’t going to be the watered-down supper service. It was the real deal, an 8-course dinner. We had some satay to kick things off, which was every bit as good as what we had at Lau Pa Sat a few days later. Next up, Balik salmon which was a nice alternative to having caviar again #firstworldproblems. I opted for the chicken and sweet corn dumpling soup which was probably my least favorite of the three soups I had on the flights, and wasn’t a huge fan of the salad either. I had actually Booked the Cook once again for this meal, but the Ssambab jumped out as a nice break from a 3rd seafood dish in a row. This was quite delicious, and definitely a step up from the equivalent bibimbap meal that is often served in First Class on many airlines like Korean Air and Asiana. 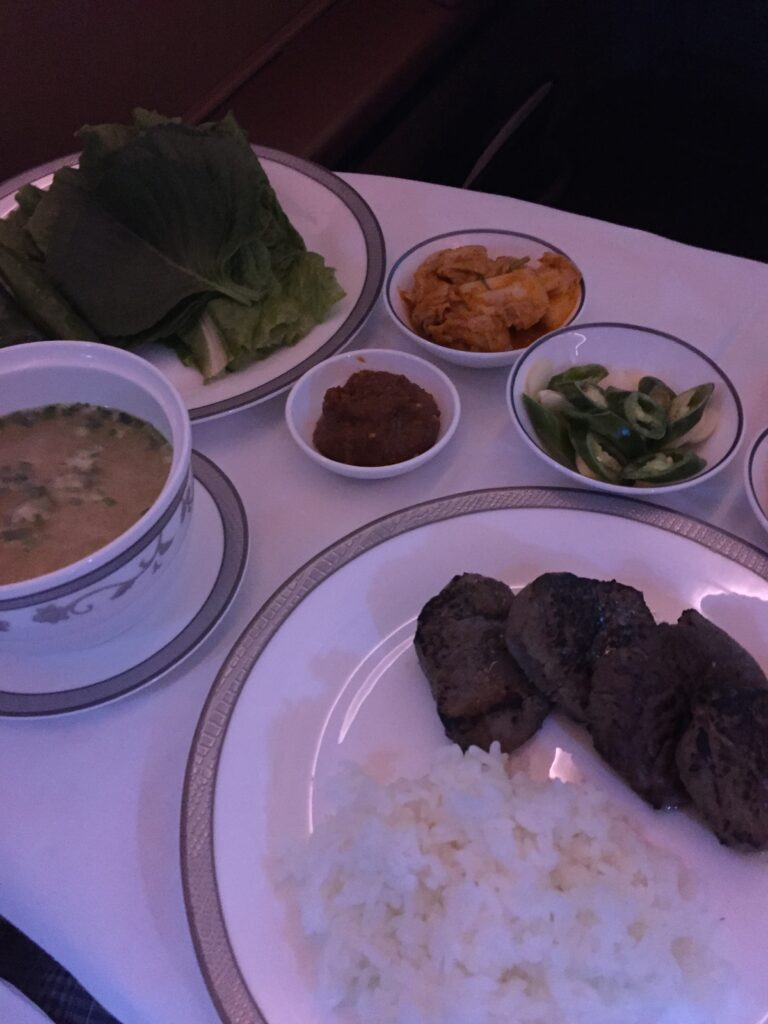 And if you’re going to indulge, you can’t skip dessert. Not quite as good as the mango sorbet on the last flight, but much more decadent. The total flight time was around 6 hours which left time for a movie after the meal, but unfortunately still no sleep. At this point, I had essentially pulled an all-niter since it was around 10AM local time. I’m pretty sure that I started to hallucinate a bit, but maybe that was all the Dom and Krug swishing around in my stomach.

Around 1AM Singapore time we began out descent into Changi. For a second, the immigration hall was so empty that I thought the world had ended while we were on the flight, and I was about to enter a Walking Dead situation…note to self: really need to lay off the champagne next time. Immigration literally took 30 seconds and we had carried on our bags, so within minutes we were in a taxi en route to the Conrad. Overall, our flights from San Francisco to Singapore on Singapore Airlines couldn’t have been any better. As I mentioned in the previous section, in some ways I actually preferred the smaller cabin on the Boeing 777 to that of the A380. While that means you’ll be “slumming” it in the standard First Class seats as opposed to the Suites, they’re nothing to scoff at, and the trade-off is that you’ll have a better chance of receiving exceptional service.