Eating the Big Apple: Dinner at Per Se Each time my wife and I go on a trip we try to squeeze in as much eating as humanly possible. If we’re really lucky that will include a fine dining meal at a restaurant on our bucket list, which includes many of San Pellegrino’s “The Worlds 50 Best”. Even though we were only in town for 48 hours, as luck would have it we were able to score a last-minute reservation at Per Se. While our reservation was on the same day as our visit to Smorgasburg, the silver lining was that it wasn’t until 9:45pm so we had at least a few hours to try and digest before eating again.

Per Se is a Thomas Keller restaurant and the East Coast sibling of The French Laundry which is located in wine country in Northern California. While The French Laundry is set in a cottage-style setting, Per Se is as urban as it gets located right in the middle of the Time Warner Center near Columbus Circle. We had a few minutes to kill before dinner, so we did a quick stroll around Columbus Circle before heading up, and even made a giant new friend along the way. Made a giant new friend on the way to dinner 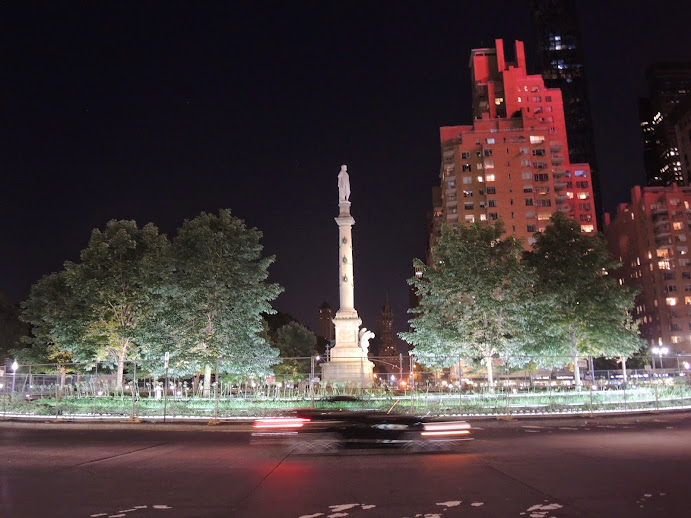 The restaurant is located on the 4th floor and starts with an entryway that leads to beautiful blue double-doors leading into the restaurant. There is a rather large waiting room and bar area which was empty when we arrived, presumably since we had one of the last reservations for the evening. We were led directly into the main dining room which is elegantly decorated and set up in a theater-style format with all tables overlooking Columbus Circle. Entrance to Per Se Dining room at Per Se

As described on Per Se’s website, each day a nine-course tasting menu is created with the philosophy of creating a sense of surprise for diners. That means that while there are a couple main-stays, the menu changes daily and you don’t really know what you’ll be eating until you arrive. After being seated, we were presented with the menu and chatted with the sommelier to get recommendations on the best pairings for that night’s menu.

Shortly after, it was showtime and the food started coming, and coming, and coming. In total, counting the amuse bouche, multiple desserts, and petit fours we probably had around 15-courses spread across the next three hours. The food was fantastic and service throughout was sharp and polished, but perhaps more than we would have liked since it made things seem overly formal to the point that it felt like we were dining with the Crawley’s at Downton Abbey.

Here’s a summary of all the food – sorry for the strange lighting in some of the photos: Six flavors of salt to choose from Lamb with sunchokes, asparagus, and dates Shredded cheese in the shape of a flower Small box of shortbread cookies, made for a great breakfast the next day

Overall, we had a truly lovely and enjoyable meal at Per Se. When you go to a restaurant that’s built a reputation for being one of the best, its pretty much a given that the food will be amazing and in that regard Per Se certainly did not disappoint. But other than food, top restaurants can really differentiate themselves on the dining experience, which for us just felt too buttoned-up and corporate. We didn’t get that pop of personality that we had enjoyed when we ate at The French Laundry. Perhaps that’s just how things are in NYC, so it’s a good thing I live out on the West Coast since I’d prefer flip flops and shorts over a suit and tie any day of the week.

Anyone else eaten at Per Se, and how was your dining experience compared to other fine dining restaurants?