Have I mentioned before that I really like Korean Air? In case you missed it I’ll say it again

I outlined a few reasons in the introduction, but another thing I like about the program is that you can form family accounts which allow the pooling of miles across multiple people. It’s not something that is featured in many other programs, with British Airways being one of the other main ones I believe. So while the booking process is a bit more complex, it was really nice not having to worry about having enough miles for 2 tickets from one account, enough for 1 ticket from each account, etc.

With an 11pm flight we had planned to catch the last airport bus at 8pm, but after checking out around 11am we had spent the entire day walking around nonstop. So while my wife can shop til she drops, I had already dropped and demanded to head back a bit earlier. We took the subway back to the Park Hyatt and got there around 5pm, got our bags, and then were dropped off by house car at the CALT bus terminal just a couple minutes away.

The airport bus system here is similar to Hong Kong’s Airport Express in that it’s really an extension of the airport, especially if you are flying Korean Air. After being dropped off we were able to check-in for our flight, check our bags, and receive boarding passes. The buses depart every 15 minutes so we only waited for a bit before hopping on with just a handful of other passengers for the 1 hour ride.

After arriving at the airport we were all set to go and headed straight through to security, then over to the Korean Air First Class lounge near our departure gate 26. Definitely felt like a deja vu moment and if anything got a bit nostalgic since this was really the first First Class Lounge I had been to. That visit came a couple years ago on my ex-RGN journey. At the time, I was like a kid in a candy store and just blown away – there’s free food!? Massage chairs!? A shower!?

Funny how human nature is and feelings are all based on what you know at that point in time. Well, now I’m a somewhat jaded Flyertalker who isn’t as easily impressed

Fast forward a couple years and after massages at TG’s BKK F Spa and after eating at the Emirates DXB F Terminal and CX’s HKG F lounge, this one doesn’t seem as great.

The food selection, even though catered by the Hyatt Recency Incheon, was just OK. At least they do have a freezer stocked full of Haagen Daaz, and I was more than happy to sample each flavor. But one thing this lounge does have going for it is space – it’s a huge room to begin with, and in both trips there there were never more than 10 people in the entire lounge at any given point. So in a lot of ways it’s certainly one of the most relaxing and comfortable lounges we’ve been to, but just not as extravagant as some of the others out there.

I decided to jump in for a shower (well, more like was told to if I’m being honest) since I was pretty gross after an entire day out in the sun. And what the lounge lacks in massages and food, they make up for in blazing fast internet (which we found consistently wherever we went in Korea), which allowed me to catch up on my beloved Sunday night TV shows Game of Thrones and Mad Men that I was missing back at home.

Saw these types of model planes everywhere in Korea

One of many seating areas

This place is never full

Nice views of the tarmac

Wait, no humans here to massage me!? 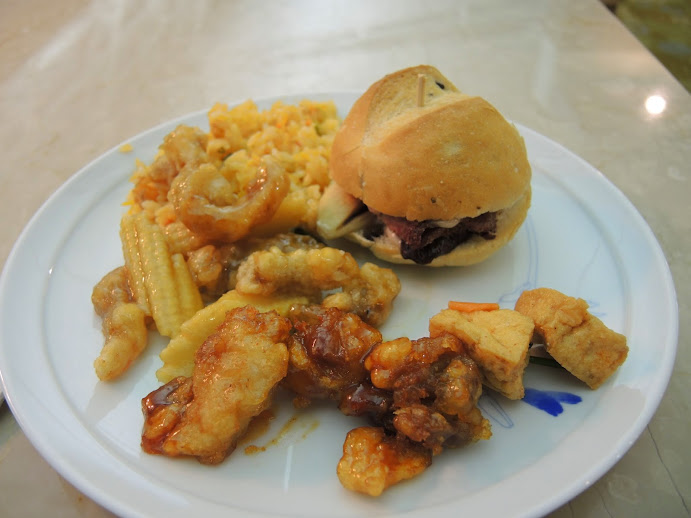 Around T-30 we headed over to the gate which was just next door and boarded our flight. While our flight had an official First Class section, it’s really just the first row of business class that is partitioned off from the rest, so the seats are indeed the same between both cabins.

On both of our Korean air flights I was amazed at just how fast they are able to board the plane. Granted it was a light load tonight (including us being the only F passengers, J looked about 25% full) we started boarding at 10:30pm sharp and were wrapped up and started taxiing at 10:45pm. It was so fast that I had to rush and quickly finish changing into my pajamas in the closet-sized bathroom.

This was a similar setup to our BKK-ICN flight a couple years back so going in we had expected this to be a sleeper-service flight with minimal food and amenities. But we were pleasantly surprised that both pajamas and amenity kits were passed out, along with two meal services – a supper right after take off and breakfast in the morning. The flight time was a bit longer than last time’s so we probably just went over cutoff for full vs. sleeper service.

I guess I’ll mention here that the flight is actually scheduled as ICN-CMB-MLE, and throughout the booking process I had inquired about the CMB layover, primarily to ensure that I wouldn’t need a visa (US citizens don’t). One agent told me that you just stay one the plane, and one told me that you get off and wait for about an hour before re-boarding. I was also confused at check-in since there is just one boarding pass that says ICN-MLE, so was hopeful that you indeed just get to stay on the plane. I asked the flight attendant while on board and she confirmed that you do have to deplane – uggh, that means I’ll have to change out of my pajamas! Well, maybe I don’t, if I’m willing to endure some dirty looks

Not sure why I thought there was a chance we didn’t have to get off, curious if there are any flights that allow it.

While both supper and breakfast were offered, I had stuffed myself at the lounge since I thought there would be just one meal offered in the morning and really wasn’t hungry. So both my wife and I asked if we could instead have our supper right before landing in lieu of breakfast. The flight attendant was more than happy to do that for us, not sure if it helped that we were the only passengers other than a single seat reserved for the spare pilot.

Really great service again on the flight, and right after takeoff the flight attendant came by to offer turndown service. While we were in the “F” section, the seat really is a J seat in a 2x2x2 config on this A330-300. So there was no aisle access for me as I was seated at the window and would have to jump over my wife. It’s a good thing that we knew each other, as a stranger wouldn’t have been as receptive to my clumsiness and occasional falls while trying to jump in/out.

With the help of a Benadryl i got a solid 7 hours of sleep, and for once the cabin wasn’t kept too warm. Before I could wipe the gunk out of my eyes, the flight attendant was standing next to me with a hot towel and getting my table set up for supper. Food was once again superb – great mix of western appetizers, along with my entree which was a full Korean ginseng soup (and I mean full as in an entire chicken).

Walking over to gate 26

Still has plenty of leg room

Won’t turn down the opportunity for Korean Ginseng Soup

After landing we de-planed and a representative was waiting at the end of the jet bridge to hand out transit cards. We were instructed to walk over to the Ariya lounge just a few gates away and wait there until boarding was ready. The Ariya lounge was more than comfortable for the 1 hour layover – they had plenty of seating, and a decent selection of food and drinks. Also, pretty decent wifi speed so was a good chance to catch up on email.

About an hour later they said that the flight was ready for boarding, and we headed back to gate 12 where there was a security check. Ready for boarding in this instance meant that everyone else was already on board, so all of the First/Business passengers were able to jump on and were in the air just a few minutes later.

We were greeted on board by the same crew, and shown to our same seats. All the nice stuff (Bose headphones, blankets, pillows) were replaced with crappier versions, but other than those minor things everything else was unchanged. It was tough to survive for 1 hour CMB-MLE leg without the Bose headphones, as the new headphones let in much more ambient sound. Happy to report though, that I survived

I was still full from my “breakfast” which was really the supper service but did end up nibbling on some yogurt and fruit. If we had eaten breakfast on the previous flight, I wonder if we basically would have been offered the same exact food again on the continuation. The continuation was even emptier than the first leg, and I estimate that business class was only about a 10% load – I can see why these MLE routes aren’t profitable to the airlines but hope that KE, CX, and SQ continue to offer them.

We landed just shortly after 7am in MLE and were able to catch some great sunrise shots from the plane. Overall, another fantastic experience with Korean Air.

Sun rising as we take off from CMB

About to land at MLE on a gloomy day