Back to the Islands: Eating our way through Seoul + Park Hyatt Seoul After landing we were out of the airport terminal in just 15-20 minutes since there wasn’t much a line at immigration and we had carried-on our luggage. I had done some research beforehand on how to best get to the Park Hyatt. There are three main options which are to take a cab (approx. ~$75 flat rate), take the subway, or to take either the Korean Air or CALT airport limousine buses.

The subway requires a few transfers which isn’t ideal if you have luggage with you, so we decided on the airport bus which is very reasonably priced at ~$16 per person and takes about an hour depending on traffic. If you take the CALT bus they drop you off at the CALT bus terminal which is in walking distance to the hotel if you know where you’re going. Alternatively, you can take a cab for the short ride and the hotel will pick up the fare.

We ended up using the bus and would highly recommend it. They have buses leaving every 15 minutes and the seats are really comfortable. If you decide on this option for your return, you can buy tickets through the concierge charged to your room (more points!), and they will drop you off at the CALT terminal in the house car. If you’re flying Korean Air, you can even check-in your bags and receive boarding passes at the terminal.

For our 2 night stay in Seoul I had been noodling between the Park Hyatt and the Conrad. I had heard the PH isn’t in as good a location as the Conrad, and as a Hyatt Platinum I wouldn’t be receiving free breakfast as I would as a HH Gold. But with no better use in mind for a Chase Anniversary night later this year I ultimately decided on the PH, and used 15,000 points for the 2nd night. Overall, great value as rooms were pricing out at $400+ during that time.

We arrived at the hotel around 7pm and headed up to the 24th floor reception to check-in. I had done some homework and knew to expect this – guest floors can only be accessed through this floor so you have to go up to go back down. It’s a minor inconvenience but we got used to it by the end of our stay.

The hotel is located at the corner of a busy intersection in Gangnam and has an interesting layout to say the least. As a lowly Platinum I didn’t receive any upgrades and was assigned to room 1501. The front desk clerk that checked us in showed us to the room, and because I’m a very light sleeper I was concerned with the proximity to the elevators. In fact, the room is positioned in a weird way such that your head while sleeping is basically pressed up against the wall where the elevators are located just a few feet away.

Well, they must have some serious insulation because across the two days we did not hear the elevators at all or even talking/chatter from people at the elevators once. There are only about 10 rooms per floor, so it helps that there isn’t a lot of foot traffic. If anything, there is some noise coming from the street through the windows, and I asked for ear plugs for this which they were happy to provide.

The room layout is also…interesting. The shape of the building is very angular so inside there are a lot of edges, which makes for some nooks and crannies especially near the shower/tub area. The room is indeed very modern and sleek in the traditional Park Hyatt design, features a lot of natural light when the blinds are lifted (but also not much privacy with office buildings surrounding, so make sure you’re dressed), Asian-style toilet with heated seat, and blazing fast internet. Service at the hotel was really fantastic across all of our interactions with the staff members. 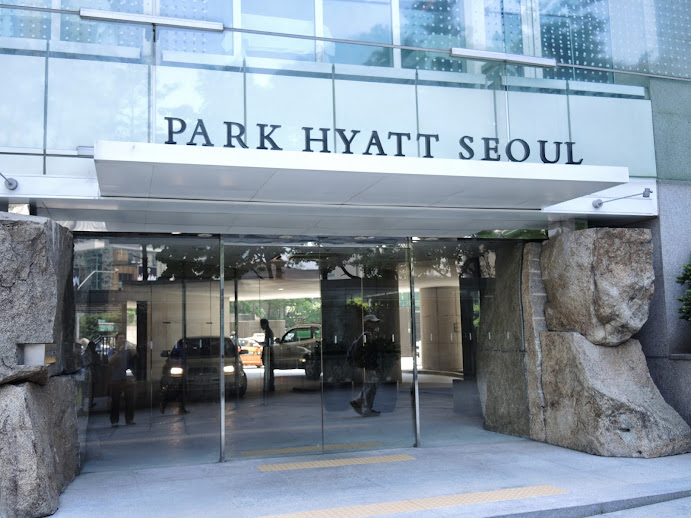 Bedroom, wall is adjacent to the elevator bank 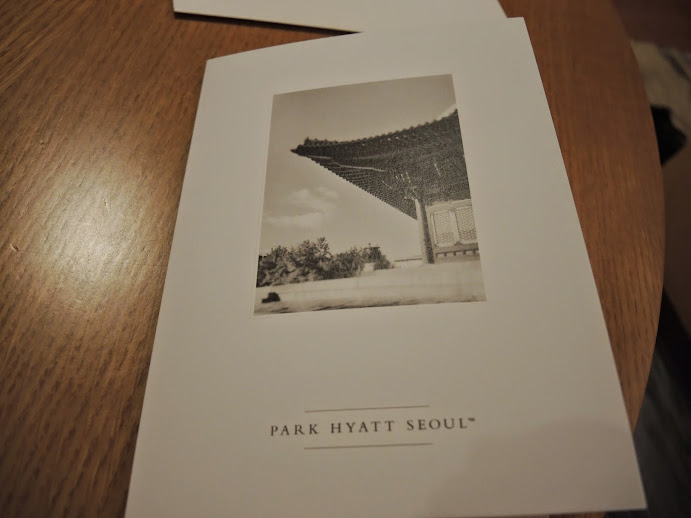 Neither of us had slept much on the flight so we were ready to pass out – but it was only about 8pm and we knew that sleeping now would mean prolonging the jet lag. We needed go out for a bit to fight the jet lag, and what better way to do that than by stuffing our faces with beef. We had done some research on places that we wanted to try, and Mapo Sutbul Galbi was one of them. It’s located just a 10-minute cab ride from the hotel in the Apujeong neighborhood, and we confirmed our choice with the staff at the hotel who gave the thumbs up from the local perspective.

We’re used to taking public transport or walking places, but everyone kept telling us to just take a cab which we did. It was only a $5 ride so pretty reasonably priced, and as we would find out over the next couple days the subway stations are huge, so for short distances cabs make a lot of sense since so much time is spent just getting in/out of the subway stations.

The galbi at the restaurant was amazing – they do all of the cooking for you which involves constantly changing the metal cooking rack I presume to make sure it doesn’t get too hot and overcook the meat. At home we’re used to eating Korean BBQ with huge bowls of rice, but here it’s a bit lighter and just wrapped in lettuce. They also don’t salt or season the meat at all, so my first piece left me a bit appalled at how plain albeit delicious and fatty the meat was. But I soon realized that was why they had given us each a bowl of salt to season each piece individually. I also ordered naengmyon (cold noodles) which were very refreshing. 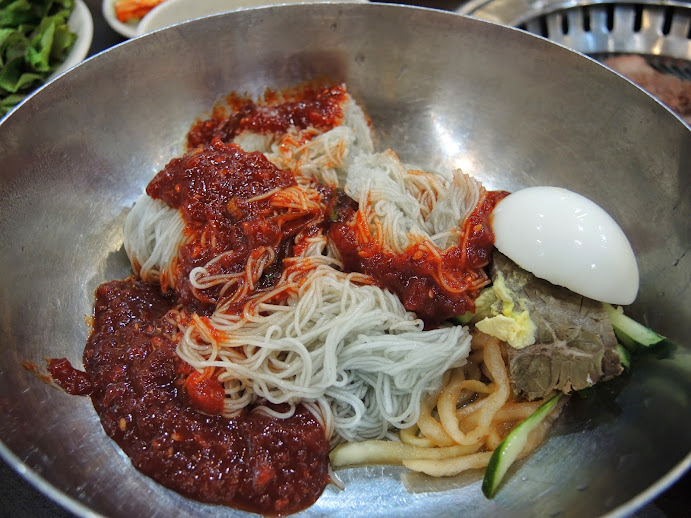 The next day we woke up for a full day of sightseeing. It was actually a funny feeling not having breakfast available for free at the hotel – I joked to my wife that it was the first time in years that I could remember that being the case. Happy to report that we survived – grabbing ramen for breakfast one day at Coex Mall, and the other day by eating at Paris Baguette which we have here in the Bay Area, but was even better over in Seoul.

We took the subway over to the palace which took about an hour with the transfers. There was a Korean ginseng soup place that we wanted to try that was apparently near the palace, but we had a hard time navigating our way there. In general, Korea isn’t quite as English-friendly as a place like Hong Kong, which led to multiple instances of getting lost.

Well we lucked out in that we stumbled on a really long line filled with locals – and when in doubt, just get in the long line outside a restaurant because chances are that they serve really good food. We followed this mantra a couple times during the trip and it never failed us.

If you go, don’t be intimated by the line as we started out at the very back with literally 100+ people ahead of us, and were inside eating within 20 minutes. There’s only a couple choices so food is prepared very quickly and there are a lot ot seats inside so things move fast. The ginseng soup was fantastic – I remember i had it for the 1st time in my life when i went to Korea several years back and really liked it. There were huge chunks of ginseng inside and they even have an option of with black chicken.

Taking the subway over to the palace

Korean gingseng soup (sorry but don’t have a phonetic spelling of the name, help!)

When in doubt, just get in line

After lunch we headed over to the palace, and we had timed it to arrive for the 1:30pm free tour. Warning: this place is huge, and CROWDED. During the tour, my wife actually got separated from the group, which led me to have a mild freaking out session and went to look for her, which was like trying to find a needle in a hay stack. This was unfortunately the week before watching Louis CK’s subway rules episode, or I would have known better and stayed in one place and instead did the opposite by leaving to look for her

So many people, don’t get lost! 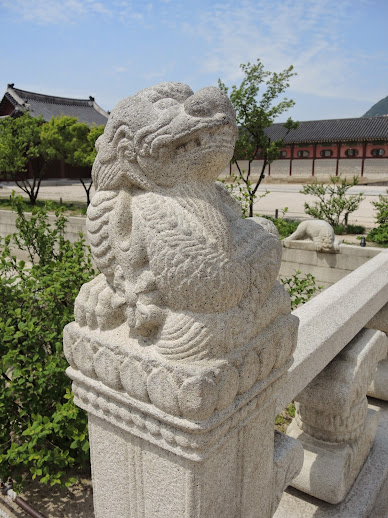 So good, but so spicy!

Sausage on a stick

We had grand intentions to party the night away in Gangnam, but jet leg and food coma hit us like a ton of bricks and we were in bed by 10pm. We managed to sleep in until around 8am, and headed out to Coex mall to check things out. We had read that you could spend an entire day at Coex, but that’s probably true only if you visit the aquarium and catch a movie as we were in/out in about an hour.

Hobby store with various airplane models for those collectors out there

Afterwards we finished packing up back at the hotel, then checked out and left our bags at the concierge since our flight wasn’t until 11pm. I also confirmed the purchase of our return bus tickets at the front desk which was good since it took care of our transportation back to the airport, and it gave me a good sense for how much cash I had left to spend.

We then headed over to Dongdaemun and the wife did some hardcore shopping at Doota tower. We grabbed more street food and then walked around briefly at Namdaemun market.

Walking along the stream

At this point, we were absolutely exhausted and decide to take a break by checking out out the Gourmet 494 food court at the Galleria mall in Apujeong since we had read good things about it. There are a ton of international options here – everything from pizza to Korean to Mexican to even Cheesecake Factory. We love bingsu (korean shaved ice) and wanted one last fix before leaving town.

Ironically, despite all of our research we somehow missed the fact that one of the best bingsu’s in town is actually at the Park Hyatt and had been under our noses the entire time! We had even gone back to the hotel to get our bags and could have eaten there, but didn’t realize this until we were already at the airport, ah well. Overall, a great short trip to Seoul and very comfortable stay at the Park Hyatt.