The was the first time in my life that I was actually excited to head home from vacation. As I had mentioned earlier, I had booked an ex-CMB ticket that would take us from CMB to LHR via DXB with both legs on Emirates F. Our CMB-DXB flight was a 9:40am departure and we headed to the airport around 7am since I was nervous about traffic, and had read that Emirates is notoriously strict about the check-in cutoff times. Lucky for us there was barely any traffic, and we were checked-in and sitting in the Emirates lounge by 7:30am. After getting yelled at by my wife for once again rushing to the airport only to sit around, I grabbed some breakfast/coffee. The lounge was very specious and clean, but the food offerings weren’t that impressive.

View from the EK lounge at CMB We headed to the gate around T-45 just as boarding was starting. I had been a bit worried about an aircraft substitution which has been known to happen on this route (downgrade to 2-cabin aircraft) but we were in luck today. It’s funny how much I stress and worry about things leading up to a flight, when in reality 99% of the time things work out just fine

Our flight featured Emirates F Suites, and as others have mentioned, the first thought that jumped into my mind was BLING. Everything about bling-air just feels so over-the-top, but after spending the day in Dubai I see that it’s really just an extension of the vibe there.

The seat is extremely spacious (although not as wide as SQ) and features both a handheld and tablet for controlling the seat/lighting/IFE, a personal mini-bar, snack basket, vanity area with mirror and lotions/scents, and a large TV screen. The suites also have doors that can close which are motorized and are controlled by the tablet. Everything that moves in the suite is motorized, and on this morning flight it didn’t bother me, but on my next flight when trying to sleep the sounds can definitely add up when the entire cabin is moving around and adjusting to the point that it woke me up while wearing earplugs.

But for this 4-hour flight all was good as I felt the high of getting to experience a new airline. We found the service to be great, starting with dates and Arabic coffee served during boarding, all the way through the meal service. Just before landing we were also given fast track passes which helped expedite the immigration process.

At long last, finally get to try bling air 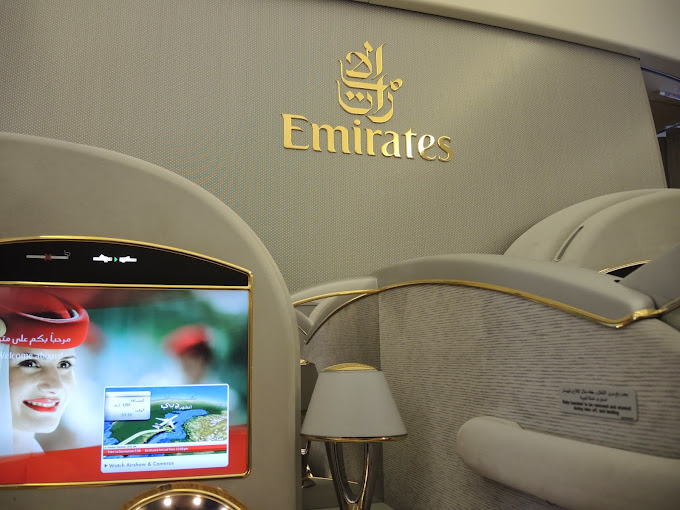 Vanity area with lotions and scents Arabic mezze, very bland. Can get better stuff at a schwarma place near my office Soup which was pretty watery Wife’s ravioli dish which she gave two thumbs down I’ll cover our 13-hour layover in Dubai in the next post, but instead will jump to our next flight aboard the A380. The seats are actually the same and are located on the upper deck. It was a full house tonight which was interesting since it was a 3am departure from DXB to LHR. DXB really felt like a 24-hour airport as the departure board was full with 2am and 3am flights that departed around the same time as ours.

Since it’s a sleeper flight, we were given the choice of eating immediately or before landing. I also knew that I wanted to shower (just for the novelty of it, as I had just showered an hour ago the lounge), but the best time slot they could give me was 3 hours prior to arrival. This would mean I’d only get about 3 hours of sleep before having to wake up for my shower. Instead, I decided to shower immediately, and then I could sleep for about 5 hours before waking up for breakfast. During the boarding process we also received and amenity kit, slippers, and pajamas which are my new favorites that I’m even wearing at this moment as I type this

About 30 minutes after take-off once we had leveled out, the flight attendant came by and invited me over to the shower spa. She showed me briefly how it worked, and after that I was left alone to enjoy the most unnecessary shower I’ve ever taken in my life. Nevertheless, it was fun and I was able to manage my 5 minutes of water to make sure I didn’t walk out with a head still full of suds. After exiting, the bathroom attendant gave me a detox juice and some fruit. One thing I found very impressive was the fact that there is a dedicated bathroom attendant that cleans the two bathrooms after every use.

I returned to my suite with turndown service already completed, and was able to close the door and doze off for the next few hours. I woke up just an hour prior to landing and ate a unremarkable breakfast just before touching down in LHR. 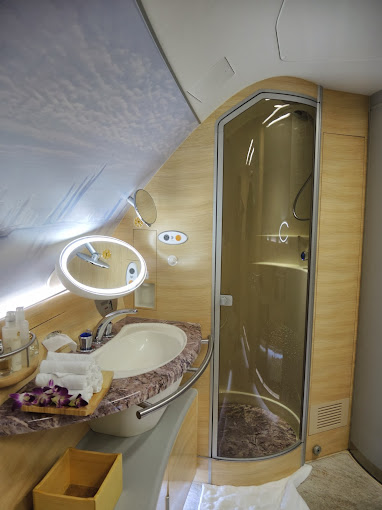 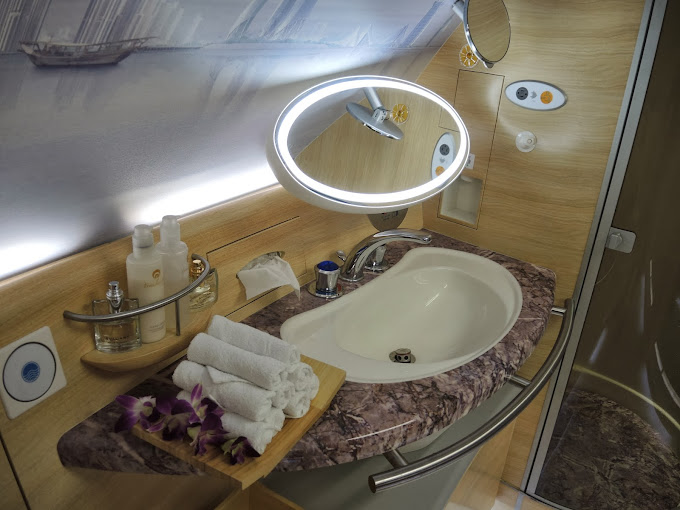 Final thoughts on Emirates – going in my expectation was that bling-air would be a lot more style than substance. But I really don’t feel like that was the case as the seat, the IFE system (ICE) and the service were probably the best we have come across on our travels. Even with the shower aside which many feel is a gimmick, what other airline has a bathroom attendant that cleans after every use. The First Class Terminal at DXB is the best lounge we’ve ever been in, and chauffer service to/from DXB during our layover was a really nice touch as we didn’t have to worry about transport at all.

The ONLY thing that we didn’t like was…the food on board. And that’s a big thing for us. We didn’t get to experience a dinner service as we only had lunch and breakfast, but in both cases we were not impressed at all. So for those that are keeping score, my wife cast her vote that SQ > EK and I would have to agree with her.