Since we were still jet lagged we woke up bright and early around 6am and headed down for breakfast. The buffet spread is really fantastic, and once again we gorged ourselves silly and ate way more than we should have. We headed back to the room and just hung out until around 10:30am, after which we packed up and headed down to check-out and onto the shuttle bus that took us back to Taipa ferry terminal.

We had booked our tickets ahead of time for a 12:30pm departure (definitely recommend booking return tickets in advance) but since we were running early asked to be put on stand by which was no problem at all. We ended up getting on the 12noon departure and arrived back in Hong Kong by 1:15pm, after which we hopped in a taxi for a short ride over to the Grand Hyatt in Wan Chai.

We had stayed at the Hyatt Regency in Tsim Tsa Tsui last time and really liked it as the location is extremely central to restaurants, shopping, and transportation around the area. This time, we decided to stay on the Hong Kong Island side, and since the Conrad was sold out for NYE, the next best option was to book the Grand Hyatt Hong Kong. The standard room resumptions were unavailable at the time, but I was about to book a club room for a few thousand more points. I was more than happy to part with 27,000 points vs. the $1,100 retail price of the room for the night.

We checked in and were given the choice of a a room on the club floor that had not been renovated, or a newly renovated room on a slightly lower floor (26th floor), which we ended up choosing. The room really feels fresh and brand new and was more spacious than expected. It felt very open and similar to some of the Park Hyatt rooms that we have stayed in. Unfortunately only the garden view was available, so we made plans to watch the fireworks from the Club Lounge on the 30th floor later that night.

View from the foyer 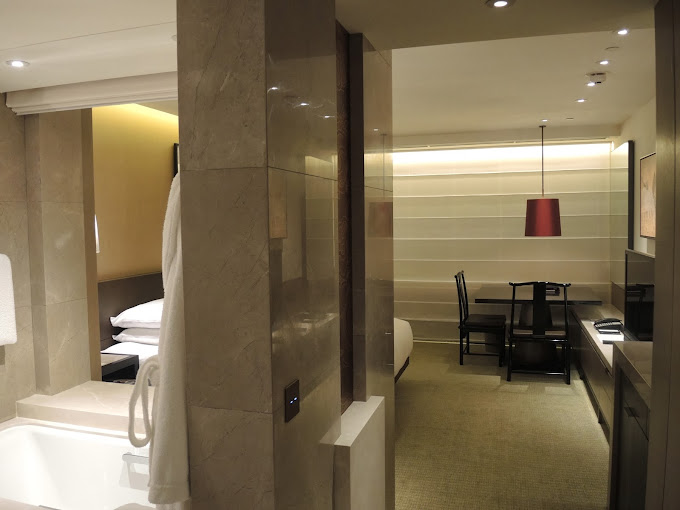 Open view into the bathroom Laziness took a hold of us at this point since neither of us had any must-dos remaining for our time in Hong Kong. So we did a lap around the area ending up in Causeway Bay/Times Square where we grabbed a bite in the food court, walked over to the HK Convention Center, then headed back to the hotel around 6:30 to grab some canapes in the lounge. There was a long queue for tables when we arrived, so we just grabbed a couple plates and used the overflow space in one of the adjacent meeting rooms. Walking by the convention center The Club Lounge entrance is on the 30th floor, and there is a grand staircase that leads up to the main lounge on the 31st floor. This is probably one of the best hotel lounges we have been to, and the views of the harbor are fantastic. The evening canape selection was great, and we easily made dinner out of it.

Daytime view from the Club lounge We went back to the room for a couple hours, then headed back to the lounge around 9pm just in time to snag the last remaining table by the window. Not sure when others had arrived, but I suspect they had been camping out since the canapes ended around 7:30pm.

We struggled to stay awake past midnight given the jet lag, but it was worth it for the spectacular display of fireworks over the harbor, and the Club lounge was a perfect place to see everything as the fireworks ended up being right at eye level. It was also a perfect mix of festiveness with a private party feel as there was a crowd of about 30-40 people and champagne was passed around, while not having to deal with huge crowds outside. We saw pictures from some our friends that watched from other locations (such as the Ritz rooftop bar) and the fireworks looked so small from such a high vantage point.