We would have preferred to catch the night time flight but weren’t able to get seats on the smaller 77W, so the daytime 747 it was. Like a kid on Christmas day I woke up excited to try out another new airline. Our flight was at 11:50am and we arrived at the airport around 9:30am. Check-in was very quick, and we headed over to the “A” side of the international terminal where I had actually never been before.

By now I know Terminal 3 and International Terminal G like the back of my hand, but today I actually had to read and follow the signs which took us up the escalator and down the hallway to the CX lounge. We were one of the first passengers to arrive and the lounge felt very new and fresh as I believe it was recently remodeled. There was a little bit of food set out at the buffet, as well as a noodle bar where I had a bowl of wonton noodles and dan dan noodles which were both just OK. 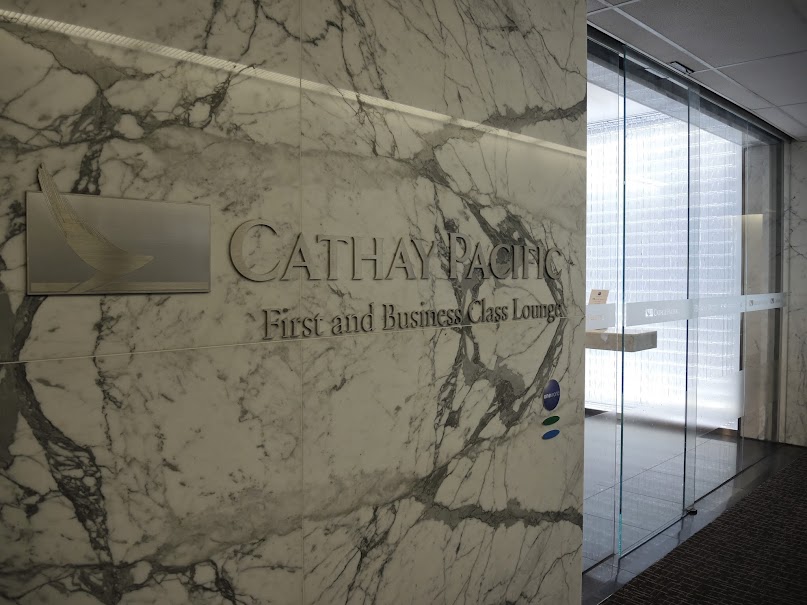 Not much of a view from the lounge, just a single Korean Air plane

We headed toward the gate around T-60 so that we could stretch our legs and do a bit of shopping in the terminal before getting on the long flight. As we were leaving, the lounge agent said “please wait sir, your flight is not ready for boarding yet” which is a similar reaction that we’ve gotten when leaving the lounge prior to boarding commencing for our flight. I guess that most first/business class passengers have the mindset of wanting to be able to wait until the last possible minute to board, but for me I’m perfectly happy being one of the first people to board which gives me more time to relax and get settled in (of course much to my wife’s chagrin).

We arrived at the gate and an announcement was made that *gasp* boarding would be delayed by 10 minutes. The number of sincere apologies for this delay, you would have thought that the plane was several hours delayed or even cancelled. Perhaps I’m just used to standard boarding procedures with domestic airlines, where only a 10 minute delay in boarding would be a blessing.

We headed on board and were escorted to our seats 1A and 1K. As much as I enjoy reading FT trip reports, I guess I will say that part of the excitement of entering a new cabin for the first time is diminished as I basically knew exactly what to expect for the flight, all the way from the seat to the IFE to the food and even to the amenity kit/pajamas. But that’s not to say that I still very much enjoyed experiencing all this for the first time.

The cabin load was only 4/9 for the flight and even though the suites don’t have doors, 1A and 1K felt extremely private, yet close enough to still feel like we were traveling together. During the boarding process, pajamas and amenity kits were distributed. Cathay just switched from the Shanghai Tang pajamas to the new Pye pajamas which were amazing. The material was very comfortable and felt like it was very high quality. As an added bonus, there is a slip inside the pajama bag for a free gift at any Pye store, and we picked ours up at the store in Hong Kong inside Pacific Place which was a nice boxed set of 5 pocket squares. The amenity kit is Zegna branded but the contents were a bit underwhelming.

General impressions about the first class product were that it felt warmer than Emirates, and the seat width was fantastic and was the first we’ve come across that matched the seat we had on Singapore. But the suite is definitely more low-tech than some of the other first class products we’ve tried. It would have been nicer to have a little bigger TV screen, and the IFE offerings were just ok, but may have been influenced by the fact that we had been traveling just the month before and had seen most of the movies already.

Being a day time flight, I expected to be up for most of the ride and actually ended up staying up the entire time as I just couldn’t get myself to fall asleep. Part of it was the fact that the cabin was just too hot , but I think that’s par for the course on most of the flights I’ve been on. Also, the mattress padding wasn’t particularly comfortable.

Anxiously waiting at the gate to board

Seat width matches that of SQ’s 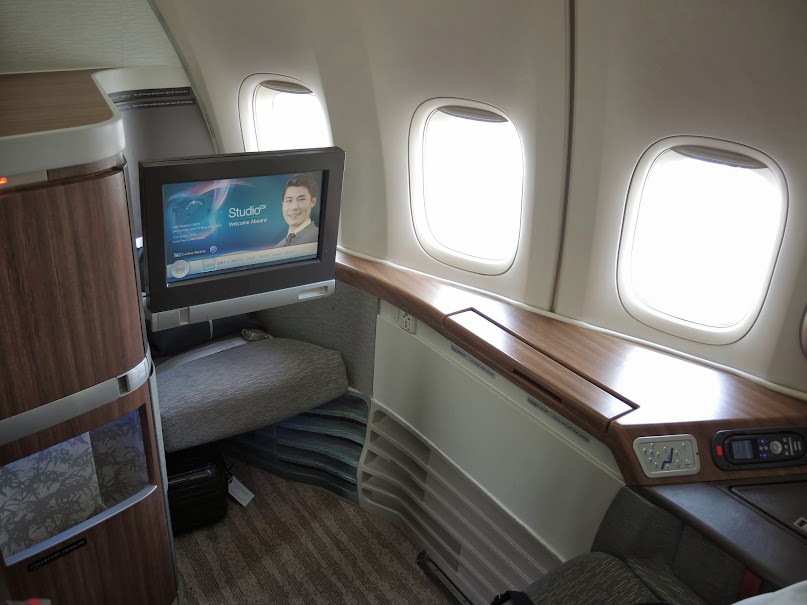 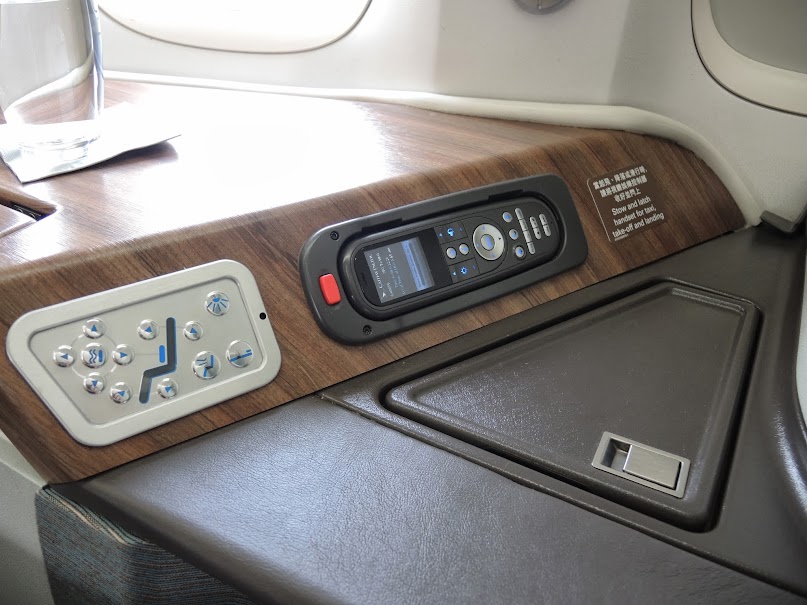 Free gift, make sure not to throw away the slip 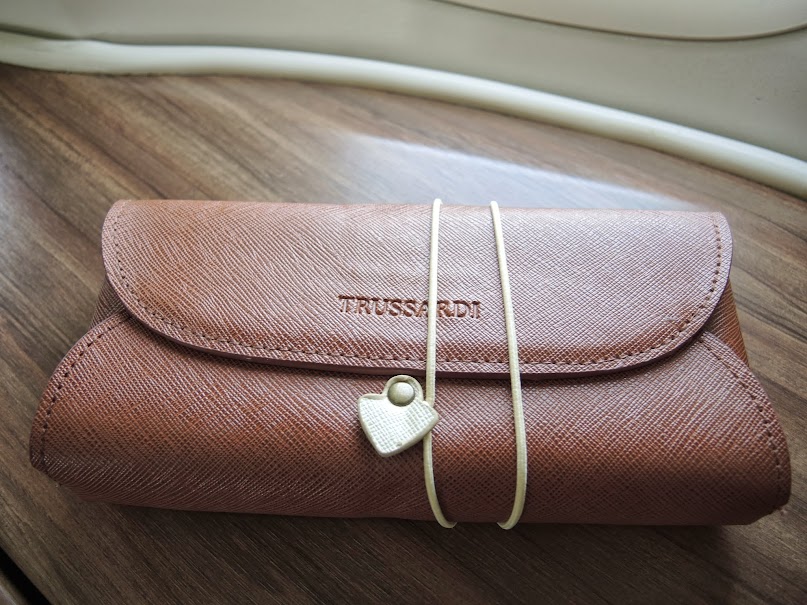 View of the office, much happier where I’m currently sitting

Menus were passed out and we were very excited for the lunch as we’ve heard the food on CX is a highlight. We each started with caviar, then had the Chinese ginseng soup, scallop salad, and then for me back to the Asian menu for the chicken and abalone entree which was fantastic. The wife had the herb-crusted sea bass and really enjoyed it. Lastly, we finished up with cheese, dessert, and then tea and pralines.

Service throughout lunch was extremely attentive and efficient, with the pacing determined by each person, not at the slowest eater in the cabin’s pace which can happen at times. The perfect example of this, was that since I’m an extremely fast eater, I finished my entire meal just as my wife was starting her entree. Normally, we will always be +/- 1 course from each other, which means that I’m often waiting around for long periods of time for my next course. Champagne and nuts to start 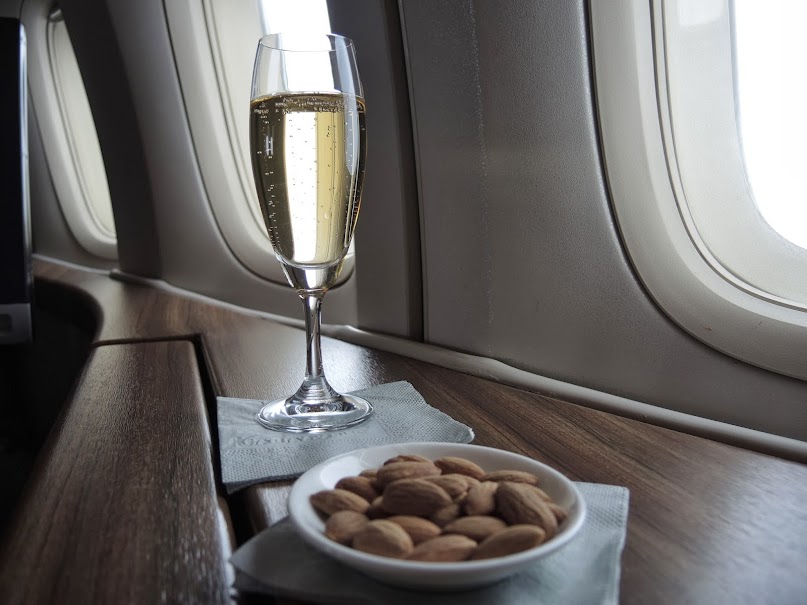 After lunch I requested turn down service and got comfortable for the remainder of the flight. Since it was a daytime flight and I have trouble sleeping on planes in general, I pretty much gave up on trying to take a nap. A few hours later I had a snack of the hot pot rice which was really delicious, and ice cream.

I had burned through all of the movies I wanted to watch on the IFE system, but had come prepared with my own entertainment and watched a movie and a few episodes of Summer Heights High on my iPad. About 2 hours out from HKG, dinner was served which consisted of some fruit, and for my entree I had the pork chop which was again very delicious. I had some cake, pralines, and one last Hong Kong milk tea to finish.

Overall, we really enjoyed our first flight on Cathay. We both felt that the food was probably the best we have ever had on board a plane, and the service was very attentive but not quite as warm as what we had experienced on SQ or EK. The only negative was that the suite just felt so dated and low-tech compared to the others we’ve experienced recently, otherwise CX very well may have shot to the top of our lists. So for now, the king stay the king, and SQ still sits atop the totem pole for both of us.