As I was planning this trip, award availability on New Years day was terrible as I suspect that airlines were holding on to these seats in the hope of last-minute sales. So the best I could do a week out was to book United F as a placeholder, with the hope that something better would open up. As expected, on NYE day I woke up and was happy to find that 2 seats had opened up on the CX 747 in first class for the next day.

Unfortunately, I was a little short on Oneworld points, and made the decision to cancel my SFO-LHR redemption on BA next summer, and use those 150,000 Avios toward the painful 210,000 total Avios needed. Taxes and YQ came out to around ~$300 for 2 tickets, versus the ~$2,400 I would be getting back for my original redemption. So in that regard, I was more than happy to be getting over $2k back by switching to a partner airlines instead of BA. Also, part of the rationale behind cancelling was that we were underwhelmed with our first BA F flight last month, and weren’t particularly looking forward to flying BA again. I’ve thought about it more, and I don’t have any regrets for pulling the trigger on this. The 140,000 United miles from the cancelled booking have already been rebooked on a future trip LAX-ICN on OZ F prior to the upcoming devaluation.

Since we were jet lagged, even though we had stayed up past midnight we were up at 7am and grabbed a light breakfast in the Club lounge since we knew we’d be eating in the lounge as well as on the plane. Even though the flight wasn’t until 2pm, we arrived at the airport around 10am which gave us plenty of time to enjoy The Wing First Class Lounge.

Overall impressions about the lounge were that it was very sleek and modern, and wasn’t too crowded. There are a few different seating areas with a mix of couches and individual chairs, and everywhere you turn there is electricity outlets which is something that is often overlooked at airport lounges. The food is served in the ‘The Haven’ which offers a buffet as well as a la carte options. I was particularly excited about the food in the lounge since it’s catered by the Peninsula, but to be honest there was nothing special here.

We also checked out the cabanas which have private bathroom, shower, and bathtub along with a day bed. These actually felt a bit claustrophobic for two people and we only spent about 30 minutes here before deciding to sit outside in the main area. If we wanted to take a nap then we probably would have stayed longer.

All things considered, this is a very nice lounge, but considering that it is Cathay’s flagship first class lounge wasn’t special in any way and certainly didn’t make us say “wow” as the Emirates lounge in DXB did. Eggs benedict, wife said it tasted much better than it looked One funny thing about the lounge were the urinals in the bathroom, which were by far the smallest ones I have ever come across. Had to really concentrate here as even the slightest deviation in aim would lead to disaster Around T-30 we headed down to Gate 3 where our flight was just getting ready for boarding. I had selected seats 1A and 1K again, so it was a bit of deja vu as we’d have the same exact seats on the same plane type.

Not as many pictures this time as the plane/seat/IFE/amenity kit/pajamas/etc. were all the same. While our flight to Hong Kong was scheduled for 15 hours, this one was only 12 hours and went by very quickly. Luckily we were flying on January 1st, which meant a fresh batch of IFE movies newly added. I ended up watching Runner, Runner (not as bad as expected) along with Rush which was absolutely phenomenal.

We felt that service on this flight was definitely better than the last, as it was not only attentive but also very warm. A nice touch was a hand written card that we received during the 1st meal service which we had never received before on any other flight.

I learned my lesson from the last flight, and opted to not change into PJs and instead just wore a t-shirt and shorts which was perfect for the warm cabin temperatures. I also requested a small size pajamas and kept them unopened and will be re-gifting them to my mom since she loved the Shanghai Tang ones she got when flying CX F last year.

The food on this flight was fantastic again, with the highlights being the Chinese style lobster and hot pot rice. I was even able to get a good 4-5 hour nap in this time, despite still feeling like the mattress padding was too thin and could use some improvement. Overall, another fantastic flight on Cathay Pacific and I can’t wait to fly them again. 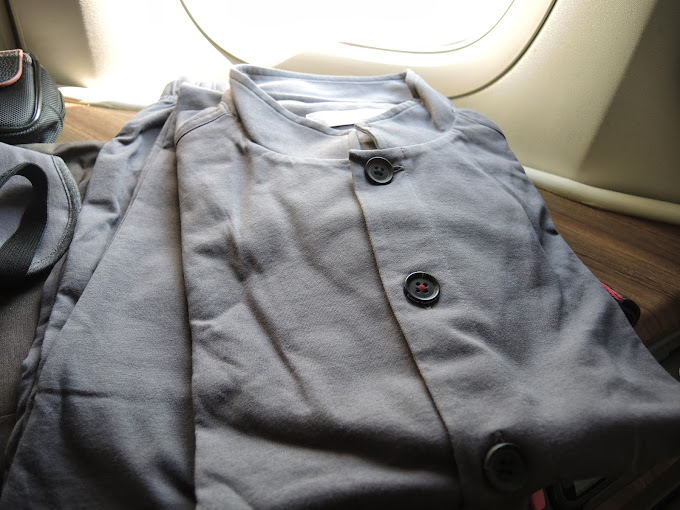